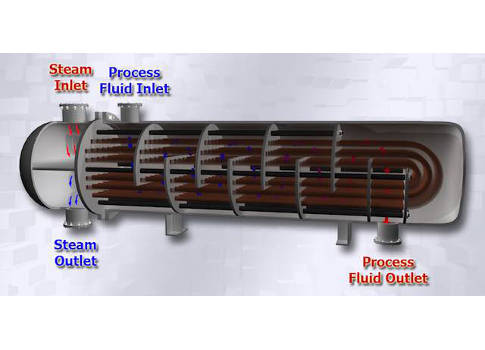 In order to develop a complete control strategy for this control loop, it is very important to identify the process variables first or one have to identify first what is controlled variables, what is manipulated variables and what falls under disturbance variables list.

Here the outlet temperature of process fluid (Tcold, outlet) is considered as controlled variable, which is your desired output.

In the feedback control scheme, the process variable, T1Out, is measured and applied to a proportional-integral-derivative (PID)-based feedback temperature controller (fbTC), which compares the process variable with the desired temperature setpoint and in turn calculates and generates the control action required to open or close the steam control valve .

The most important advantage of the feedforward control scheme is that regardless of the disturbance source, the controller will take corrective action. Employing feedback control requires very little knowledge of the process. Therefore, a process model is not necessary to set up and tune the feedback scheme, although it would be an advantage.

The major disadvantage of feedback control is its incapability to respond to disturbances—even major ones—until the controlled variable is already affected. Also, if too many disturbances occur with significant magnitude, they can create unrecoverable process instability.

Thus one can say  feedforward controller quickly and directly compensate on the effect of a disturbance.

To implement feedforward control, an understanding of the process model and the direct relationship between disturbances and the process variables is necessary. For heat exchangers, a derivation from the steady-state model will lead to the following equation, which determines the amount of steam flow required: