Materials are ubiquitous, Plays an important role in every individual daily life, manufacturing industries, Research & Development sectors and many different Areas. Reliability of any physical products mainly depends on its material. To ensure that the product will work satisfactorily under the different  operating condition we must know about nature of the material.

We all know that material is composed of the smallest unit i.e. proton, neutron, and electrons. These subatomic particles or elementary particles creates atom, atom creates molecules, molecules forms a particle, and particles forms a grain,  resultant as a material. Such a material behaves differently under the different work environment. So main aim to study material science and strength of material is to predict the behavior of material in different environment and different loading condition.

Elasticity:  Ability of material to recover it’s original shape and size after removal of load called elasticity. If material recovers it’s shape completely then we said that body is perfectly elastic body. If recovery is partial or not complete then it is known as permanent deformation.

For manufacturing purpose elasticity is not desirable but for structural purpose it is desirable property. One can think that the rubber band that we use in our day to day life possess a  high elasticity but this is totally wrong assumption, because elasticity is the ability to recover it’s shape and size, not the ability to get elongate. Steel is more elastic material than rubber since the recovery is more in steel than rubber.

Plasticity:  Ability of the material to deform permanently under the externally applied load called  plasticity.

Ductility: Ability of material to get drawn into a wire under tensile load without fracturing is know as ductility. After removal of tensile load material retain a new shape. Ductility is often measured using a tensile test as a percentage of elongation, or the reduction in the cross sectional area of the sample before failure. 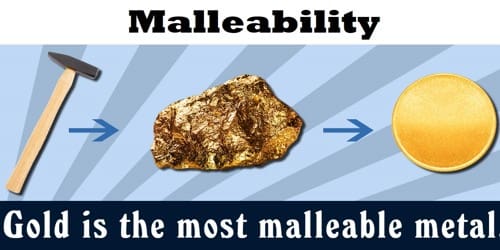 Brittleness: The sudden failure of material without any deformation under the externally applied load is know as brittleness. Brittle material does not give any notice or indication before failure. Glass, cast iron, ceramic, hard plastic, concrete block are the good example of brittle materials.

Hardness:  Hardness is resistance to scratch, wear, tear and penetration. Hardness increase with brittleness and decrease with toughness. The unit of hardness is N/mm2.

Strength: Ability of material to withstand load without any failure, this ability is known as strength. It is one of the most important property of material.

Basically strength is of three types

It is possible that one material can withstand high compressive load but fails to withstand  shear load and tensile load.

Resilience: It is ability of material to absorbs energy when under goes to elastic deformation and release that energy when load is removed. Important applications like, shock absorber, springs, diaphragms, etc. higher  value of resilience is required.

Stiffness: It is ability of material to offer resistance against deformation called stiffness. It can also be define as force per unit deflection. stiffness is denoted by ‘K’ and it’s unit of N/mm.

Creep: Ability of material to deform under its own load. It is time dependent failure at  constant load. Creep experiment can be carried out at room temperature and high temperatures. But at high temperatures creep is high.

Fatigue: It is defined as property of metal by virtue of which material fails at lower stress value than available stress value in material when subjected to cyclic stress or load. Fatigue failure is main cause of almost all the fracture.

Machinability: It is ability of material that gives us good surface finish, low power consumption, and low wear to machining tool while undergoing to plastic deformation and cutting.

Wear Resistance : It is the ability of material to withstand the effects of two materials rubbing against each other. Rubbing of two material may include many forms such as: it may be by adhesion, abrasion, scratching, galling, gouging or else.

While designing  any product we need to consider these above mentioned mechanical and physical properties. These properties provides us an optimized material selection idea as per requirement.