Surge tank is level control strategy in which is used to control the level of liquids in process equipment or tanks, by this tank, no floodation case happend.

Under normal operating conditions, these storage buffers allow each process area to be operated independently of the other process areas.

Any imbalance in the area production rates within a plant will be reflected by a change in level of the surge tanks between process areas.

When a downstream process area is made up of a continuous process, then its throughput may be automatically adjusted based on the surge tank level, as illustrated below.

When the rate of flow of a fluid passing down a pipe-line changes, there is a change in pressure. The severity of this effect depends upon the rate of change in the flow rate, the length of the pipe and its diameter. In small bore pipes there is no real problem other than maybe an annoying hammering sound. In large water mains the rate of change in flow is carefully controlled to avoid damage to pipes and valves. Unfortunately this solution will not work with Turbines where a sudden change in load requires a rapid change in water demand.

Here Surge Tanks or Stand Pipes are used to reduce the pressure surges. When the flow to the turbine is reduced, water flows into the surge tank and conversely for increased load , the initial extra water required is from the surge tank.

The size of the tank should be such that water will not overflow when the turbine is suddenly shut down, nor allow air to be drawn into the system following a sudden increase in demand. In addition it must be sited as close to the turbines as possible to avoid surges in the length of pipe between the surge tank and the turbine. 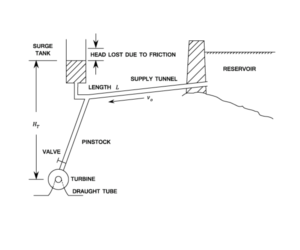