WHAT IS RATIO CONTROL ? 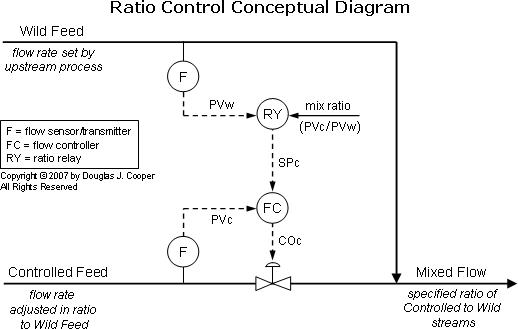 In the above conceptual diagram  flow rate of one of the stream feeding the mixed flow, designated as the wild feed (primary flow), can change freely depends upon upstream conditions. The flow rate of this feed might get changed on the demand of product based on various required parameters (energy availability, feedstock variation, production rate etc.)

whereas, the another stream is mentioned as controlled feed (secondary flow) shown in the mixed flow feeding scheme.A final control element (FCE) in the controlled feed stream receives and reacts to the controller output signal, COc, from the ratio control architecture. 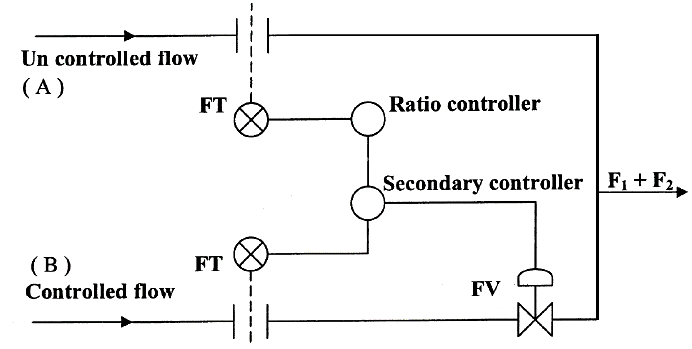 In this figure the ratio control system consisted by flow rate of two flow streams. Both are sensed by flow transmitter placed in the respective pipe line. Here in the above pipe (A), is considered as Uncontrolled flow and second (B) is as Controlled Flow.  The flow controller controls the flow of the second stream flow rate with respect to the flow in the first pipe stream flow rate.

Hence one can say, K is the ratio relay or flow fraction,

K= B/A, where K is the ratio setting of the relay.

Practical example, consider air to fuel flow into the furnace. 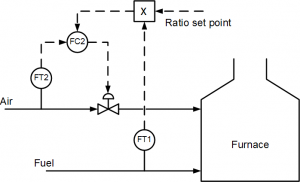 Here Fuel is considered as wild flow where as air is consider as the controlled flow. The stream of air is controlled by the help of flow transmitter (which senses the flow rate) and Final control elements allows to valve %opening / %closing.