We all know that atoms/molecules  always vibrate on their mean position due to its molecular thermal energy so generally 30% of conduction take place due to inter molecular vibration and remaining 70 % is because of free electron transfer(Metals). On a macroscopic scale it seems there is no conduction in liquid and gases but on a microscopic scale molecules of  liquid and gases are vibrating over a short distance due to somewhat of its thermal energy as a result conduction comes into picture.

Conduction is governed by Fourier’s law.

Fourier’s law of heat conduction which states that the heat flow by conduction in any direction is proportional to the temperature gradient and area perpendicular to the flow direction and is in the direction of the negative gradient. The proportionality constant obtained in the relation is known as thermal conductivity, k, of the material. The mathematical formulation is given in equation

A= perpendicular area of heat in (m2

What is a thermal conductivity ?

Thermal conductivity is nothing but ability of material that allows the heat energy to pass through it Or, Ability of a material to conduct Heat. Thermal conductivity denoted by K and unit is W m/k. It is a constant of proportionality in Fourier’s law of heat conduction and play very important role in heat transfer. 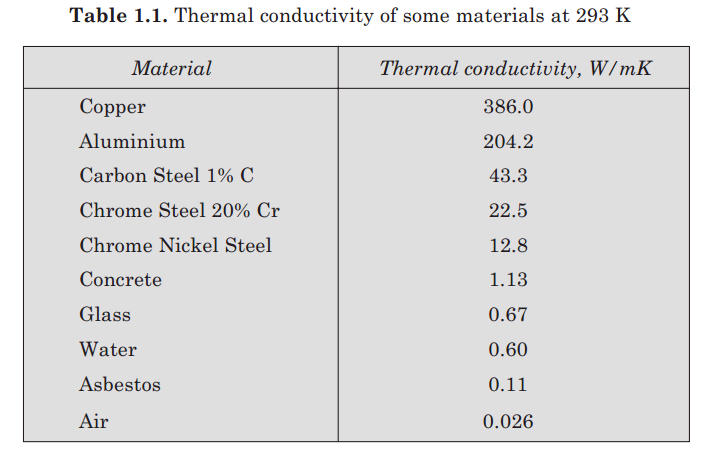 It is an another mode of heat transfer, which takes place between solid surfaces and surrounding. Here the energy which is getting transfer is combined by molecular diffusion and bulk mass flow.

The heat flow is independent of the properties of material and depends only on the fluid properties, flow properties & geometry (i.e. the shape and nature of the surface will influence the flow and hence the heat transfer significantly effected by the geometry of surface).

If flow is caused by buoyant forces due to  temperature difference than  it is known as natural convection And, if flow is produced by some external means like pump and fan than it is known as force convention.

Here in Figure 2, the heat is getting transferred from hot plate (Temp of Plate > Temp Of Fluid) to  cold fluid layer(almost nearby of the plate) by conduction and then one layer of fluid to another layer of fluid or between the fluid bulk  in  y direction  by convection.

3. Radiation:  It is the mode of heat transfer in which the transfer of heat takes place in the form of electro-magnetic waves. Radiation heat transfer does not require any material medium for its propagation, it may also occurs through vacuum. Also, Till these electro-magnetic particles impinges to another surfaces it doesn’t not releases its heat content (That is why a significant amount of heat we obtain after being sun so far from Earth).

Every body except 0oK emits thermal energy in the form of electromagnetic waves traveling with Speed of light called radiation. Such radiation incident on surfaces is absorbed and thus radiation heat transfer takes place between surfaces at different temperatures.

No material medium is required for radiative transfer but the surfaces should be in visual contact for direct radiation transfer.

where, F— a factor depending on geometry and surface properties,

T1 and T2 are surface temperatures. 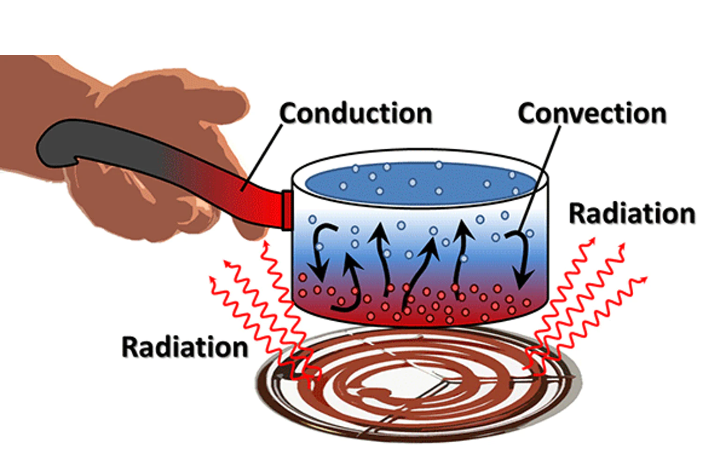 Here, In Figure 3 heat transfer from coil to surface of the vessel is by means of radiation. Within the Surface of vessel by conduction and from container to fluid by means of natural convection because flow of fluid is due to buoyant forces.