The crude oil after being processed through physical separation processes especially Vacuum Distillation Unit (VDU)  is left with heavier residual fuel oils in the bottom of a distillation unit which are undesirable for any refining unit.

The liquid fractions so produced is highly olefinic and aromatic as well as contain high sulfur content.These liquid products can prove to be a feedstock for other refinery units by converting into a high value fuel using reforming , desalting ,hydrodesulfurization (HDS),etc.

The sulfur content in the products from coking is relatively lower than the feed because much of the sulfur remains in the pet coke.

These conversions are processed in units known as Coking Drums or Coker.

Important : Generally Coking is carried out at  high pressure and high temperature as high pressure allows decomposition of heavier hydrocarbons into lighter ones like naptha, gases , LGO (Light Gas Oil) etc. in contrast to VDUs where operation is carried out at very low pressure due to which Atmospheric Distillation Unit (ADU)  residue does not decompose, and therefore we get LGOs and HGOs along with vacuum residue as products from VDU.

There are various types of coking processes depending upon the product requirements and feed properties :

In this article ,we are going to discuss fluid coking and flexi-coking processes. 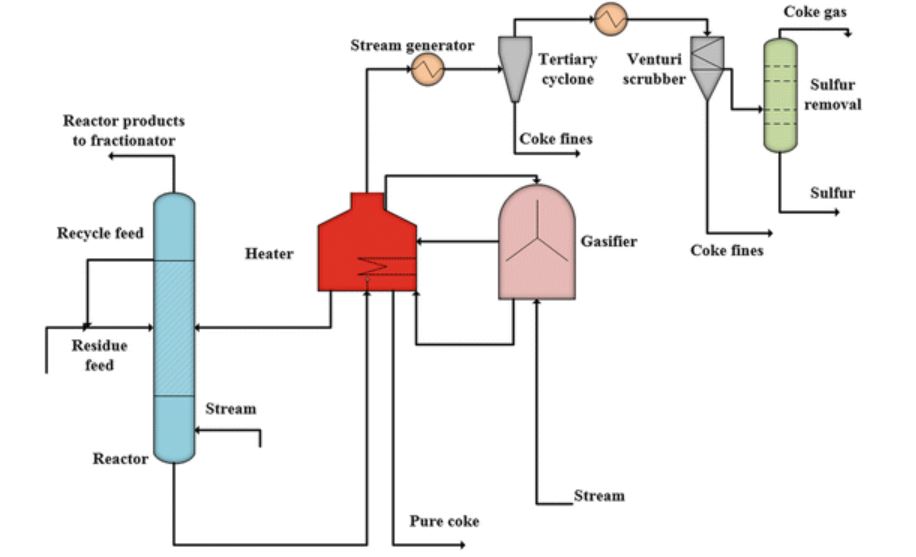 Flexi coking is one of the most important processes in a refinery as only 2% of  coke is produced from the residue.

In Flexi-Coking process, feed after preheated to 315-350oC enters into the reactor fluid bed of hot coke  at a temperature of 510-540oC .The hot coke is recycled from the heater at a rate enough to maintain the desired temperature. This recycled coke from the heater provides the heat of evaporation and sensible heat to the feed and enables the cracking process. Vapors and lighter fractions are obtained at the upper end which are passed through separators to separate the coke particles from the products and somee high boiling cracked vapors are condensed and recycled to the feed.

The coke produced is deposited as thin films in the bottom of the reactor bed and is stripped off with steam.

The coke stripped off at bottom is sent to the heater where it is heated at around 590oCand the hot coke is sent back to the reactor and the excess coke ,also known as purge coke, is withdrawn at the bottom of the heater. The gases at top of the heater are sent to tertiary cyclones and venturi scrubbers to separate out fine coke particles and then it is treated to remove the sulfur content.

The coke then moves to gasifier where it reacts with steam and air to produce a fuel gas consisting  of H2,N2,CO and CO2  .This gas from the top of the gasifier is sent back to the bottom of the heater to fluidize the heater bed and provide necessary heating to the coke and send it back to the reactor.

Thus, it can be concluded that the major part of coke is used to heat the feed with the help of a gasifier which produces fuel gas which heats the coke in the heater.

Also, the main purpose of the heater is to transfer the heat from the gasifier back to the reactor bed. 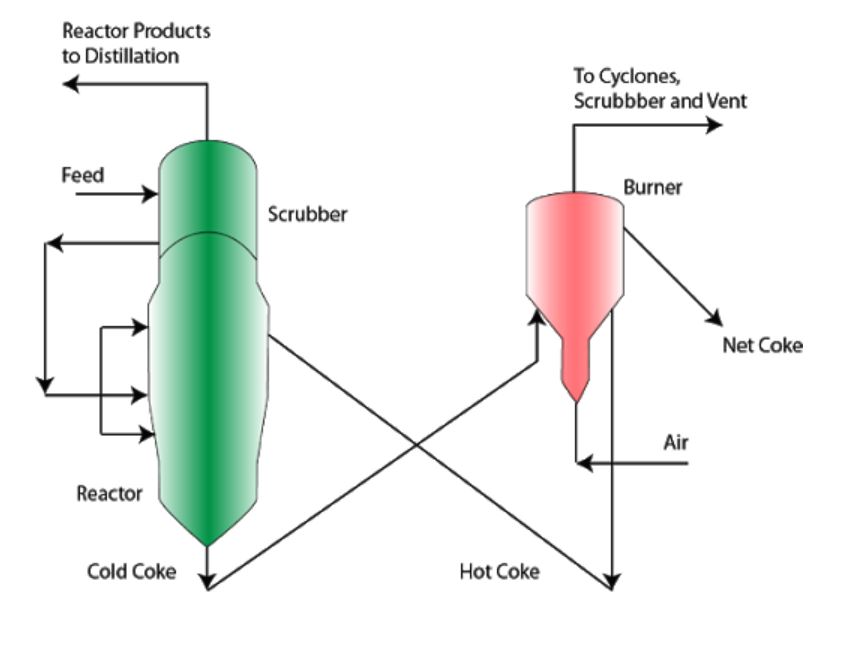 It is a much simpler version of flexi-coking process consisting of a reactor bed and a burner.It does not consist of a gasifier.

The lighter products from the reactor are withdrawn as overhead vapours and the remaining coke at the bottom is separated continuously .

The cold coke at the bottom of the reactor is fed into the burner in a layering manner , and a scrubber is also present there to scrub any heavier hydrocarbons on coke, where it is fluidized with the help of steam. Some part of coke (15-30%) is sent to burner for combustion along with injected air and the coke is heated up and the rest is separated out.

The hot coke is sent back to the reactor bed and combustion of coke in the burner produces flue gases of lower calorific value which is processed with the help of separators,scrubbers etc. and can be used in steam generation , power generation etc.

The pet coke so obtained out of burner is used as cement industry fuel and partial oxidation feed.

So, it can be analyzed that both fluid and flexi-coking processes involve separation of lighter materials from the VDU residue and reduction of coke as plenty of coke is used in heating up the coke. Therefore, much of the residue is converted to fuel gases during combustion to heat up the coke and lighter fractions at the top of reactor bed  and the remaining is left up as pet coke.Also,the amount of coke left in case of flexi-coking is less than that of fluid coking.