What is Lumped Heat Transfer Analysis ?

If the size of body or radius of body ( in case of sphere or cylinder) is too small or conductivity of the body is too high,  resulting in a negligible amount of resistance, it will take very small amount of time  or almost negligible time to transfer heat throughout the body and ultimately achieving thermal equilibrium.

Therefore, it can be concluded that a body in which temperature is not a function of position inside a body but only a function of time is known as “Lumped Heat Capacity Analysis”.

Note : Internal heating resistance cannot be zero and rate of heat transfer cannot be infinite , so it will always take time to reach thermal equilibrium. Therefore,there cannot be a perfect Lump Heat Capacity System but a good approximation to it can be assumed. 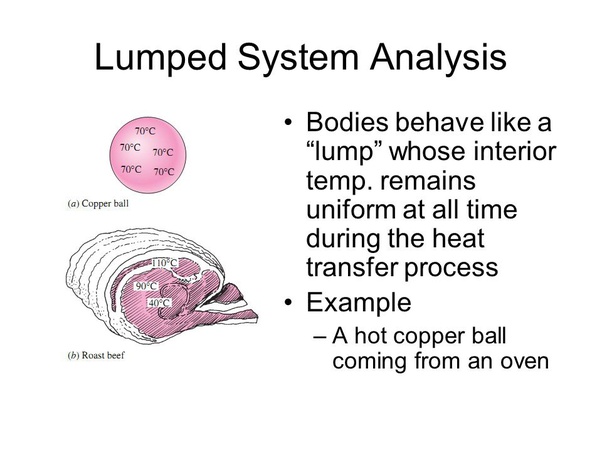 Example : A copper ball taken out of an oven , due to its small size and high thermal conductivity , will have high heat transfer rate and will result in uniform temperature throughout the ball and making it an ideal condition for approximation to Lumped Heat Analysis whereas a roasted beef due to lower thermal conductivity will have lower heat transfer rate and a variation in temperature throughout the body.

When a copper ball is taken out of hot water or the oven in air , it can be approximated to the Lump Heat Capacity system.

Heat transfer from the surface of the ball to the outside surrounding through the convection process will decrease the accumulation of heat inside the body.

Ignoring conduction inside the body due to Lump Heat Capacity system,

By heat balance at the surface of ball ,

When will  Lumped Heat Analysis be applicable to a system ?

The Lumped Heat analysis will be reasonably applicable when the result from the approximation remain within an error of  5 %.

To analyze whether a system is applicable to Lumped Heat Analysis , the value of a dimensionless number “Biot Number” is considered.

As Lumped Heat Analysis assumes a uniform temperature throughout the body, the conduction resistance will be zero, which means Biot Number is zero.

So, it can be said that,

If  Biot’s Number is less than 0.1,the internal resistance will be negligible and will be a good approximation to Lumped Heat Analysis and time required for conduction will be nearly to zero.

And if Biot’s Number is greater than 20, the external resistance will be very less resulting in very fast convection but the conduction will be very slow.