What is an Orifice Meter?

An Orifice Meter is basically a type of flow meter which is used to measure the rate of flow fluids (mainly Liquids or Gases),  using the Differential Pressure Measurement principle.

There is basically  an Orifice Plate installed in the orificemeter  which  provides obstruction to the fluid flow. Here, the streamline contracts because of the area contraction due to  orifice which is placed between the pipe by flange.

There is a vena -contacta considered as minimum area -cross section.

A differential pressure is developed across the Orifice Plate which is directly  proportion to the flow-rate of the liquid or gas.

When a liquid / gas, whose flow-rate is to be determined, is passed through an Orifice Meter, there is a drop in the pressure between the Inlet section and Outlet Section of Orifice Meter. This drop in pressure can be measured using a differential pressure measuring instrument. 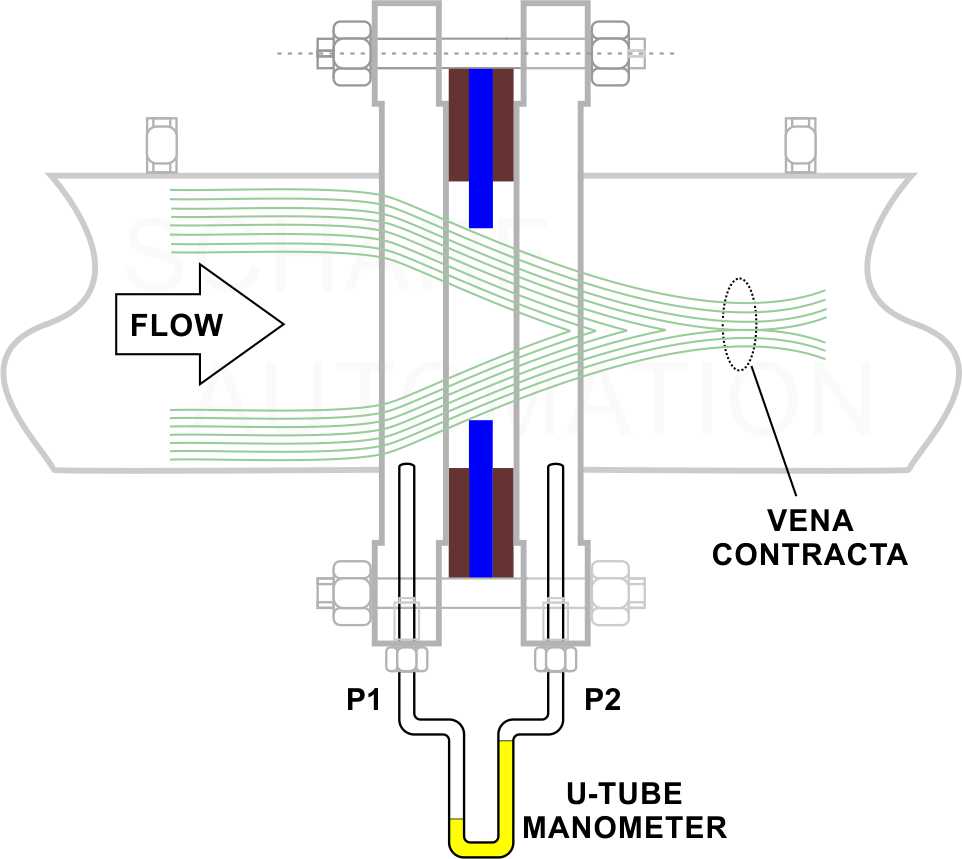 Fig 1  Flow through an Orificemeter

are the piezometric pressures at Sec.1-1 and c-c respectively.

where Ac is the area of the vena contracta.

Hence,    where ‘∆h’ is the difference in liquid levels in the manometer and ρm is the density of the manometric liquid.
Volumetric flow rate

where, Coefficient of discharge of orificemeter (Cd) is 0.61.

An Orifice Plate is inserted in between the Inlet and Outlet Sections to create a pressure drop and thus measure the flow.

A linearly extending section similar to the Inlet section. Here also the diameter is the same as that of the outlet pipe for an end connection for an outgoing flow. Here we measure the Pressure of the media at this discharge.

As shown in the adjacent diagram, a gasket is used to seal the space between the Orifice Plate and the Flange surface, prevent leakage.

The Orifice plates in the Orifice meter, in general, are made up of stainless steel of varying grades.

Orifice meters are built in different forms depending upon the application specific requirement, The shape, size and location of holes on the Orifice Plate describes the Orifice Meter Specifications as per the following:

It is made up of SS and its thickness varies from 3.175 to 12.70 mm. The plate thickness at the orifice edge should not be exceeded by any of following parameters:

*Beta Ratio(β): It is the ratio of orifice bore diameter (d) to the pipe inside diameter (D).

It is similar to Concentric Orifice plate other than the offset hole which is bored tangential to a circle, concentric with the pipe and of a diameter equal to 98% of that of the pipe. It is generally employed for measuring fluids containing

It has a hole which is a semi circle or a segment of circle. The diameter is customarily 98% of the diameter of the pipe.

This type of orifice plate is used for flow such as crude oil, high viscosity syrups or slurries etc. It is conceivably used when the line Reynolds Numbers* range from 100,000 or above or in between to 3,000 to 5,000 with a accuracy coefficient of roughly 0.5%.