In this Article we will be looking at what is water hammer and its impact on industrial fluid applications.

Water hammer is a noise that occurs in pipes when too much pressure builds up in them. So, rather than a normal flow within the pipes, the water is crashing around in them and creates a loud noise. The banging sound happens after the shut-off of a valve, which stops the water from exiting a faucet. Once the water, or other fluid, is stopped, there is a surge of pressure against the existing pipe structure. Water hammer can be defined as follows :

Water hammer (or, more ofently, also termed as  fluid hammer or hydraulic shock) is a pressure surge or wave caused when a fluid, usually a liquid but sometimes also a gas, in motion is forced to stop or change direction suddenly, a momentum change. A water hammer commonly occurs when a valve closes suddenly at an end of a pipeline system, and a pressure wave propagates in the pipe.

This pressure wave can cause major problems, from noise and vibration to pipe collapse. It is possible to reduce the effects of the water hammer pulses with accumulators, expansion tanks, surge tanks, blowoff valves, and other features.

The hammer effect (or water hammer) can harm valves, pipes, and gauges in any water, oil, or gas application. It occurs when the liquid pressure is turned from an on position to an off position abruptly.

When water or a liquid is flowing at full capacity there is a normal, even sound of the flow. You can tell when water hammer occurs because there will typically be a big thump sound or a series of thudding noises.

That noise is the impact of the entire train of water coming to a quick halt creating a shock wave.

In the case of pressure gauges, this shock causes a spike that can damage the gauge even if the gauge is the correct pressure range for the particular flow application. 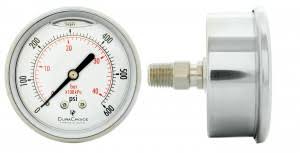 Ordinarily pressure systems should have air chambers (or cushions) installed that soften the impact and prevent the hammer effect.

Essentially, an air chamber is a vertical section of piping with a cap on the end that is attached to the supply line near the shutoff valve. It is filled with air that absorbs the force of the fast-moving liquid by compressing within the chamber. However, sometimes those chambers can fail.

To further combat the effects of water hammer you can utilize a water hammer arrester. Other tools you could use are a pulsation dampener, surge suppressor, or a pressure snubber.

The idea of each of these tools is the same: to dampen or reduce the effect of the fast-moving liquid.

Another way to help reduce the hammer effect in some scenarios is to turn off the flow of liquid gradually instead of turning the valve or faucet abruptly.

Though water hammer cannot be completely eliminated, it can certainly be avoided. There are certain best practices, which when followed, ensure least chances of occurrence of water hammer. Some of these practices are:

Most pressure systems will eventually have water hammer issues. So it is important to plan ahead and take steps to prevent water hammer to preserve your gauges, valves, and pipes.