Almost every material we could ever want is lurking somewhere in the planet beneath our feet. From the gold we wear as jewelry to the oil that powers our cars, Earth’s storehouse of amazing materials can supply virtually every need. Chemical elements are the basic building blocks from which all the materials inside Earth are made. There are 90 or so naturally occurring elements and the majority of them are metals. But, useful though metals are, they’re sometimes less than perfect for the jobs we need them to do. Take iron, for example. It’s amazingly strong, but it can be quite brittle and it also rusts easily in damp air. Or what about aluminum. It’s very light but, in its pure form, it’s too soft and weak to be of much use. That’s why most of the “metals” we use are not actually metals at all but alloys: metals combined with other substances to make them stronger, harder, lighter, or better in some other way. Alloys are everywhere around us—from the fillings in our teeth and the alloy wheels on our cars to the space satellites whizzing over our heads. Let’s take a closer look at what they are and why they’re so useful!

Photo: This fuel tank from the Space Shuttle was made from a super-light aluminum-lithium alloy, so it’s a whopping 3400 kg (7500 lb) lighter than the tank it replaced. Cutting weight from the basic structure of the Shuttle meant it could carry heavier payloads (cargo). Photo by courtesy of NASA Kennedy Space Center (NASA-KSC).

What is an alloy? 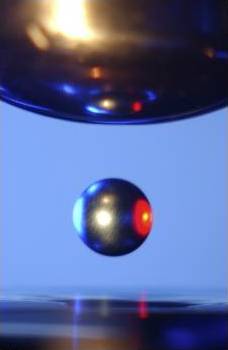 Photo: This sample of a titanium-zirconium-nickel alloy is being made to levitate (float in mid air) using electricity. It’s one of many remarkable new materials being developed for possible use in space. Photo by courtesy of NASA Marshall Space Flight Center (NASA-MSFC).

An alloy is a combination of metals or of a metal and another element. Alloys are defined by a metallic bonding character. An alloy may be a solid solution of metal elements (a single phase) or a mixture of metallic phases (two or more solutions).

You might see the word alloy described as a “mixture of metals”, but that’s a little bit misleading because some alloys contain only one metal and it’s mixed in with other substances that are nonmetals (cast iron, for example, is an alloy made of just one metal, iron, mixed with one nonmetal, carbon).

The best way to think of an alloy is as a material that’s made up of at least two different chemical elements, one of which is a metal. The most important metallic component of an alloy (often representing 90 percent or more of the material) is called the main metal, the parent metal, or the base metal. The other components of an alloy (which are called alloying agents) can be either metals or nonmetals and they’re present in much smaller quantities (sometimes less than 1 percent of the total). Although an alloy can sometimes be a compound (the elements it’s made from are chemically bonded together), it’s usually a solid solution (atoms of the elements are simply intermixed, like salt mixed with water).

Precise properties of new alloys are difficult to calculate because elements do not just combine to become a sum of parts; rather, they form through chemical interactions which depend upon component parts and specific production methods. As a result, much testing is required in the development of new metal alloys.

The structure of alloys

If you look at a metal through a powerful electron microscope, you can see the atoms inside arranged in a regular structure called a crystalline lattice. Imagine a small cardboard box full of marbles and that’s pretty much what you’d see. In an alloy, apart from the atoms of the main metal, there are also atoms of the alloying agents dotted throughout the structure. (Imagine dropping a few plastic balls into the cardboard box so they arrange themselves randomly among the marbles.)

Alloys can also form if the alloying agent or agents have atoms that are very much smaller than those of the main metal. In that case, the agent atoms slip in between the main metal atoms (in the gaps or “interstices”), giving what’s called an interstitial alloy. Steel is an example of an interstitial alloy in which a relatively small number of carbon atoms slip in the gaps between the huge atoms in a crystalline lattice of iron.

How do alloys behave? 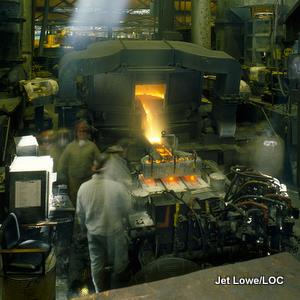 Photo: It’s not just the basic ingredients (the metals and other constituents) that affect the properties of an alloy; how those ingredients combine is very important too. Pouring or stirring speeds, pouring temperatures, and cooling rates are some of the factors that can affect the physical properties of alloys. Photo of brass alloy casting by Jet Lowe, courtesy of US Library of Congress, Prints & Photographs Division, Historic American Engineering Record.

People make and use alloys because metals don’t have exactly the right properties for a particular job. Iron is a great building material but steel (an alloy made by adding small amounts of nonmetallic carbon to iron) is stronger, harder, and rustproof. Aluminum is a very light metal but it’s also very soft in its pure form. Add small amounts of the metals magnesium, manganese, and copper and you make a superb aluminum alloy called duralumin, which is strong enough to make airplanes. Alloys always show improvements over the main metal in one or more of their important physical properties (things like strength, durability, ability to conduct electricity, ability to withstand heat, and so on). Generally, alloys are stronger and harder than their main metals, less malleable (harder to work) and less ductile (harder to pull into wires). 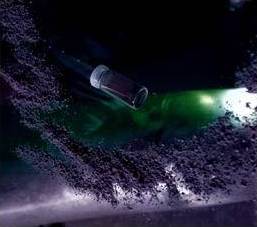 Photo: Scientists at NASA Ames have developed a technique called high-pressure gas atomization for simplifying the production of magnesium alloys. Photo by courtesy of US Department of Energy.

How are alloys made?

You might find the idea of an alloy as a “mixture of metals” quite confusing. How can you mix together two lumps of solid metal? The traditional way of making alloys was to heat and melt the components to make liquids, mix them together, and then allow them to cool into what’s called a solid solution(the solid equivalent of a solution like salt in water). An alternative way of making an alloy is to turn the components into powders, mix them together, and then fuse them with a combination of high pressure and high temperature. This technique is called powder metallurgy. A third method of making alloys is to fire beams of ions (atoms with too few or too many electrons) into the surface layer of a piece of metal. Ion implantation, as this is known, is a very precise way of making an alloy. It’s probably best known as a way of making the semiconductors used in electronic circuits and computerchips. (Read more about this in our article on molecular beam epitaxy.)

Some common alloys and what we use them for