What is a Perfect Gas?

Perfect gas, also called ideal gas, a gas that conforms, in physical behaviour, to a particular, idealized relation between pressure, volume, and temperature called the general gas law. This law is a generalization containing both Boyle’s law and Charles’s law as special cases and states that for a specified quantity of gas, the product of the volume v and pressure p is proportional to the absolute temperature t; i.e., in equation form, pv = kt, in which k is a constant. Such a relation for a substance is called its equation of state and is sufficient to describe its gross behaviour.

The general gas law can be derived from the kinetic theory of gases and relies on the assumptions that (1) the gas consists of a large number of molecules, which are in random motion and obey Newton’s laws of motion; (2) the volume of the molecules is negligibly small compared to the volume occupied by the gas; and (3) no forces act on the molecules except during elastic collisions of negligible duration.

The behavior of a perfect gas can be studied with the following gas laws that are proved from experimental results.

Let’s discuss these laws of gas in detail

Boyle’s law, also called Mariotte’s law, a relation concerning the compression and expansion of a gas at constant temperature. This empirical relation, formulated by the physicist Robert Boyle in 1662,

This Gas Laws states that under constant temperature, the absolute pressure (p) of a given mass of a perfect gas varies inversely with its volume (v).

i.e., in equation form, pv = k, a constant. The relationship was also discovered by the French physicist Edme Mariotte (1676).This law was established by Robert Boyle in 1662. 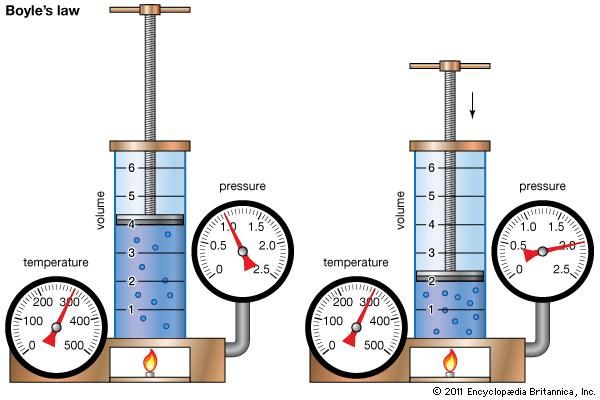 Mathematically, Boyle’s law can be stated as

Pressure is inversely proportional to the volume

The equation states that the product of pressure and volume is a constant for a given mass of confined gas and this holds as long as the temperature is constant. For comparing the same substance under two different sets of conditions, the law can be usefully expressed as

For understanding this law lets take an experiment.

Suppose we have a cylinder piston assembly which contains a gas. Keeping this system at room temperature (so the temperature remains constant), If we decrease the volume by applying an external force than the pressure of the gas inside the cylinder increases. And if the external load is removed than the volume of the gas starts increasing and pressure will decreases. This proves that when pressure of a perfect gas increases than its volume will decrease and when volume decreases then pressure increases.

Charles’s law, a statement that the volume occupied by a fixed amount of gas is directly proportional to its absolute temperature, if the pressure remains constant.

The statement of Charles’s law is as follows: the volume (V) of a given mass of a gas, at constant pressure (P), is directly proportional to its temperature (T). As a mathematical equation, Charles’s law is written as either:

where V is the volume of a gas, T is the absolute temperature and k2 is a proportionality constant

This empirical relation was first suggested by the French physicist J.-A.-C. Charles about 1787 and was later modified and implemented with sound proof  by the chemist Joseph-Louis Gay-Lussac. Charles’s law is a special case of the general gas law and can be derived from the kinetic theory of gases under the assumption of a perfect (ideal) gas. Measurements show that at constant pressure the thermal expansion of real gases, at sufficiently low pressure and high temperature, conforms closely to Charles’s law.

This law can be stated in two ways ;

Statement 1st : At constant absolute pressure, the volume of a given mass of a perfect gas varies directly to its temperature.

So we can conclude that when a system is at constant absolute pressure, at that time the volume of the gas varies directly to its temperature.

Statement 2nd : At constant pressure, all the prefect gases changes the volume by 1/273th of its original volume at 0 degree Celsius for every 1 degree Celsius change in temperature.

What is absolute zero temperature?

The temperature at which the volume of a gas becomes equals to zero is called absolute zero temperature.

Gay-Lussac’s law, Amontons’ law or the pressure law was found by Joseph Louis Gay-Lussac in 1809. It states that, for a given mass and constant volume of an ideal gas, the pressure exerted on the sides of its container is directly proportional to its absolute temperature.

As a mathematical equation, Gay-Lussac’s law is written as either:

where P is the pressure, T is the absolute temperature, and k is another proportionality constant.

Statement : At constant volume, the absolute pressure of a given mass of a perfect gas varies directly at its absolute temperature.

The above experiment proves that at constant volume, the pressure of a perfect gas varies directly to its temperature.

Avogadro law is sometime also called as Avogadro hypothesis or Avogadro’s principle. It is an experimental law which was given in 1811 by Amedeo Avogadro.

Statement: Under constant temperature and pressure, equal volumes of all the gases contains equal no of molecules.

For a given mass of an ideal gas, the volume of the gas is directly proportional to the amount of substance (moles) of gas, given that the temperature and pressure are constant. Suffixes 1,2 represents different sets of conditions for a gas.

V = volume of the gas.
n = the amount of substance of the gas (in moles).
k = constant which is equals to RT/P, where R is the universal gas constant, T is temperature in Kelvin and P is the pressure. Since the temperature and pressure is constant, so RT/P is also constant and represented as k.